What Makes You Tic: Book MAMA’s Review for Moms

At work, periodically I get emails that are sent to all faculty and staff alerting us to specific circumstances that may involve a child or his or her family and may affect our interaction with that child.  These emails are always highly confidential but often really important and useful.  If there is a student acting out it can be really helpful to know if his grandpa died or his parents are divorcing etc.  Sadly, the divorce thing is so commonplace now that we don’t get emails about just that…only if the divorce is especially acrimonious.

So early this school year, I got a progress report email about a boy I knew who was very smart but had had some behavioral issues in the past—impulse control etc.—ADHD had been thrown around but he was undiagnosed until this year when I got the email that said he officially had Tourrette’s Syndrome—which honestly wasn’t a huge surprise…not something you hear every day but I had had him in class last year and he did make little noises periodically and repetitively, but wasn’t super disruptive yet…yet being the operative word.

His classmates who see him every day from 8 till 3 are totally nonplussed.  They are so over it and utterly not shocked and awed.  One kid even waited for him to finish like a seven shit sequence so he could ask a question without being interrupted.  I see this kid one hour a week and was a little surprised that this information had not been part of the otherwise extremely informative email but I just followed the kids’ lead and went with the zero reaction policy.

As the weeks passed and his “new school year” stress level dropped, so did the shits.  He seems pretty mellow now, and as I said before, he is a really engaging and observant kid. But that can’t have been easy for him or for his parents…and I’m sure that he is in for a rough haul as the years progress depending on the severity of his condition. 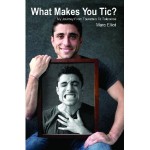 One of my go to gifts for people is copies of David Foster Wallace’s commencement speech at Kenyon College before he died: you can buy it in a little published book form called “This is Water.”  He talks about living life with compassion and patience.  It’s an incredible speech.  This is what I kept thinking about while reading Elliot’s book—his story is inspirational and he is hugely popular as a motivational speaker because of his incredible ability to live with his disorder and even thrive and then teach others his own hard learned lessons.  Live and let live, he says, and he does exactly that.  He can’t control how people react to him and so he has turned that into a lesson in tolerance for all of us.  Live and let live.