Bonk – The Curious Coupling of Science and Sex, written by Mary Roach.

A.J. Jacobs said Mary Roach could write a book about Quonset huts and he would read it—she’s that good.  Well, I feel the same way about A.J.Jacobs, so I figured I should give Roach a try.  Mary Roach is the funniest science writer around—not that there is much competition in the world of “humorous science writing.”  She’s exhaustively researched and written about dead people, ghosts, and sex in Stiff, Spook, and Bonk, respectively.   I recently finished Bonk and I will tell you that it is laugh out loud funny and not just because of the titillating subject matter.  Roach is a master of innuendo and ferreting out the funkiest and strangest little outliers of human sexuality and just utter weirdness.  She seems to be impervious to embarrassment and so is able to ask every researcher every brave question about every nuance and detail, every sweaty palm and engorged tissue, every item retrieved from every rectum and every motorized resiliently pliable artificial penis.

So, I’ve definitely had sex on the brain recently just because of this book—and not your standard variety 16 years married couple kind of sex either.  Roach covers the entire sexual spectrum in Bonk.  They say men think about sex like once every 7 seconds– which is just kind-of frightening and ridiculous.  Until I got embroiled in Bonk, I very rarely thought about sex.  I’m racking my brain actually trying to think of occasions that I’ve thought about sex recently (other than the obvious times when you are supposed to be thinking about it, like when you are doing it).  So here’s what I came up with…I’d say 2.5-3 times maybe I’ve thought about sex in the last month or so before starting the book.  Is that sort-of sad?

One time I was at the hair salon getting my hair cut and they sent me to the wash trough with “Trevor,” a good looking kid who was a new stylist’s assistant and quiet and probably gay which I’m assuming based on his wardrobe and an unfair stereotype about his career choice.  So, I don’t know if they told him to take a long time with my hair wash because my stylist was running late or if this is how he always washes heads but it was beyond glorious.  He scrubbed and he rubbed—fingers, palms, thumbs.  He kneaded and pulled and then artfully and powerfully massaged my neck and temples…and then thank heaven above…he rinsed and repeated.  I was practically hallucinating and definitely drooling and it occurred to me that I would rather have Trevor wash my hair every day than have sex every day.  Is that bad?  Does it even count as thinking about sex?

Anyway, so the second time:  there’s a guy who works out at my gym, and truth be told, I’m pretty impressed by him.  He does push-ups from a handstand position on these parallel bars  which are right by the elliptical machines.  One time he did 75…I was counting.  He also does one armed pull ups—like sets of 30 with each arm.  Then he flips himself around, hangs on the bar like a 3rd grade girl at the playground and starts doing sit ups from that position.  Eventually he drops down—landing gracefully and smoothly then moves over to these special high block deals that he then starts squat jumping over—forward and backward, back and forth, barely breathing hard. He is a pleasure to watch, I must say—better than Mob Wives which always seems to be on the gym TV when I’m there.  So: quick description of mystery gym guy: he is completely ripped but not too BIG or BUFF.  He looks more like a bar brawler than a weight lifting champ.  He’s probably 35 years old and covered in tattoos.  He has dark, dark hair and eyes, and varying facial hair scenarios.  He’s usually wearing some torn up tank top, casually allowing glimpses of back muscles and abs.  Quite frankly he’s a little scary looking.  He’s just so strong—he could kick anyone’s ass, I’m quite sure.  So I have to admit that I just vaguely pondered the idea of sex with him—not even ME having sex with him, but just that sex with him would definitely be interesting and maybe a little dangerous and that maybe he has some neat inversion tricks that I don’t even know about…

Okay, so the final ½ sex thought I had was forced on me by the most recent Sports Illustrated bathing suit issue with Kate Upton on the cover and the conversation it provoked with my girls and me…

Older daughter: Why is there a topless girl on the cover of a sports magazine?

Younger daughter: Why is she pushing her boobs down and together like that?

Younger: Why does she want them to look bigger?

I’m kidding, I controlled myself and hopefully said something super helpful and informative like: “Well, some men like women like them to look really womanly and curvy and sometimes they like to see those womanly parts.  It’s biological.”  The conversation went on with many more “why’s?” on Younger daughter’s part…suffice it to say that:

1)          It is hard to explain biology and sexual response and the male inherent reaction to a beautiful girl with huge boobs. And,

2)          It is even harder to explain how a magazine like SI went from Christie Brinkley back in the early 80’s—healthy, tanned, gorgeous, smiling and actually wearing a bathing suit to a cover that looks more like Maxim or even Playboy.

So Sex…from gay Trevor and his magic hands to mystery gym guy captivating middle aged women desperately trying to hold on to their own sex appeal by spending hours on elliptical machines, while creepy magazine editors exploit girls like Kate Upton for higher sales to those perverts who are thinking about sex every 7 seconds for God’s sake!

Bonk is fantastic—incredibly enlightening and hilarious.  Sexual research is a limited field by its very nature and the fear of prurient interests on the part of the researcher so reading about some of the early experimental works done in the name of understanding human sexuality is a learning and eye opening experience that should not be missed.  And whatever you do, don’t skip the footnotes—it’s right there that Roach sneaks in her most disarming, shocking and sometimes tangential, but always relevant, 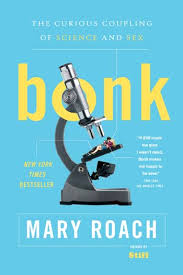 facts and details.   She is a funny gal—I’d like to party with Mary Roach.