CHARACTER COUNTS: Why I am voting for President Obama

My kids just spent a week learning about Trustworthiness, Respect, Responsibility, Fairness, Caring and Citizenship at school. We all teach and reinforce those values at home, too. It seems pretty basic, right MAMAs?

The “Character Counts” program has nothing to do with politics, religion or other cultural differences – it has everything to do with bringing kids together to highlight collective values that build up our kids and our country – very O-MAMAish!

However, after spending a week pointing out examples of these important character traits to my kids, I couldn’t help but think about the impact of the President’s character during these final days leading up to the election.

Barack Obama had multiple crises to deal with on day one of his Presidency:

•  the global economy was crashing

•  the banks were collapsing

•  the stock market crashed and Dow Jones went lower than 7,000

•  the auto industry was collapsing

•  America’s #1 enemy was still plotting terrorist attacks against us

•  50 million people did not have health coverage; 26,000 people were dying a year simply because they didn’t have access to affordable healthcare

None are true today.  The President took swift and effective action to steady our country and start moving us forward again.   He did it all simultaneously and against the odds and an opposition party bent on his failure, without regard for the fact that if our President failed, our country failed.  At a time of crisis, what we needed was to come together.

Not only did the GOP drag it’s feet, stomp it’s feet and act irrationally in the face of adversity with a record number of filibusters and refusal to compromise on anything, even on their own republican ideas, but it has been the constant attempt at undermining the President’s credibility that has been beyond reprehensible.  It was subtle at times and blatant at times, but at all times, it was disgusting and offensive to me as a citizen concerned about my country and the example it sent to my children.  For any mom out there, this alone should be reason enough not to vote for the Republican pary – I refuse to give in to a tantrum.  It reinforces bad behavior.

And, if the GOP camp wins using these tactics, I fear there won’t be any ethics left in future politics.  Politicians have been known to bend the truth at times, but to outright lie, obfuscate facts and positions, then try to deny the voices of the electorate and cheat the democratic system is alarming.

First, they started with the “socialist” attacks for passing the stimulus, bailing out the banks and the auto industry.  All actions that former Presidents have also done at one point or another.  Oh, and p.s., they worked to get our economy back on track.

Then, it became a bigger, birther conspiracy that was cynically promoted by the party.  It wasn’t a few fringe people that were marginalized by the responsible majorities, it was the underlying theme of the GOP to undermine the President’s legitimacy, disrespect him and scare people.  People who were already scared because of the terrorist attacks, economic hardship and cultural differences.  It was such a mean thing to do to people who were frightened about the future – to try and fill them with hate, instead of hope.

But, I am reminded that for the bombastic characters spewing hate on the airways, they do it for the money.  Limbaugh.  Money.  Beck.  Money.  Hannity.  Money.  Trump.  Money. Money. Money.  Hopefully, that helps put it in perspective.  The politics of fear is a lucrative business.

While our country was in trouble, our President was the leader we needed.

Trustworthiness:  President Obama has done what he said he would do and he has had the courage to step up and do the right thing when needed.  What he has not yet accomplished (reducing the deficit, comprehensive immigration reform, ending the war in Afghanistan, reducing unemployment further, etc.), he still believes in and, if given the opportunity, will work to fulfill those promises in a balanced way.

Respect:  The President has respected the American people by empowering us to share our voices and believed in us by betting on America and our workers time and time again.  He has shown resilience and the ability to step up when required. The President thinks before he acts and that thoughtfulness has helped build economic and security coalitions around the world.  He has set higher expectations for ethics and transparency in his administration than any other President in history.  His calm under pressure has built our confidence.

Responsibility:  The President understands his responsibility as a leader.  He realizes our country’s vital role in the world – we are the example and we need to lead by example, not by imposing our beliefs on other nations. He believes in our sacred responsibilities to our veterans – not just making sure they get what they need in battle, but when they come home.  He believes that government has an important role in the lives of our citizens, not in terms of dependence, but in terms of opportunity.  He believes we all must do our part to move our country forward – that we have a responsibility to each other.  Government doesn’t  usurp our personal responsibilities, but government does have a role in protecting and helping us in times of crisis and providing basic services and advancements in our daily lives – doing what we cannot do alone.

Fairness:  The President understands that we all must play by the same rules.  There needs to be a fair playing field in terms of educational opportunities, wages, taxes, trade, etc. because if we are going to get a fair shot, we must get a fair deal.  We all know the deck is stacked in favor of a few who have written their own rules and they are fighting to keep it that way.

Citizenship:  The President shared his message of national citizenship at the Democratic National Convention (VIDEO: Obama’s speech).  His years as a community organizer encouraged people to stay informed, to be good neighbors, to volunteer, to participate, to vote.  His years as President have done the same thing.  The GOP makes fun of this incredibly unselfish work done by good people every day to improve the lives of others.  The same principals we teach our kids about taking care of each other, being responsible citizens and doing right by our neighbors and strangers.  We are stronger when we work together to help our families, communities and country.

Now that our country is moving forward again, Barack Obama is the leader we deserve to continue creating jobs in America, reducing the deficit in a balanced way, achieving comprehensive immigration reform, protecting women’s rights, expanding the civil rights of the LGBT community, ending the war in Afghanistan, supporting our returning veterans, investing in education, research & development, obtaining real energy independence and appointing qualified, reasonable judges to the Supreme Court.

I honestly don’t really know what Mitt Romney believes.  I’m not sure he does either.  But, I do know what President Obama believes and what he is willing to fight for.  I still believe that hope and change is better for our country than hate and fear (and yes, I realize that change takes time).  I believe that we are all in this together and that when the least among us does better, we all benefit.  I will proudly vote to re-elect Barack Obama for President because he is the man whose  policies will create a better future for my kids and my country, but also, because character counts. 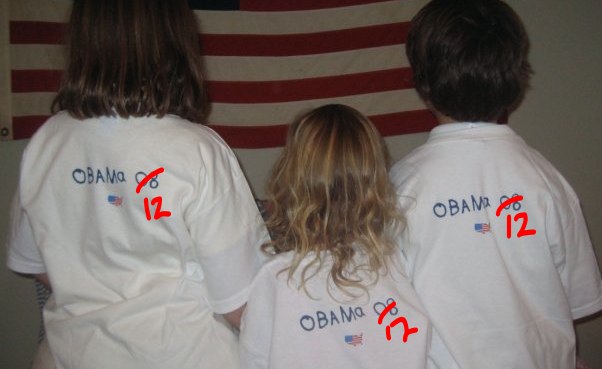 One Response to CHARACTER COUNTS: Why I am voting for President Obama